The all-new Volkswagen Transporter T6 has been unveiled.

Updates over the previous Transporter models include improved technology, more efficient engines and styling tweaks to bring the Transporter in line with other products in the Volkswagen range.

Representing the van’s sixth generation (T6) in 65 years, the new mid-size Transporter gets minor visual modifications such as bigger headlights with LED daytime running lights, a slightly taller three-slat radiator grille and a redesigned lower bumper with a wide air dam and a thin strip of chrome trim. The back end gets smaller square tail lamps, while new paint colors and wheel designs round out the updates.

Buyers after a retro-styled look can order the VW T6 van with a two-tone paint job and vintage-looking 18-inch alloys called Disc that are similar to the ones offered on the Beetle. At the other end of the spectrum, the base-model Transporter with welded-in rear windows gets by with black plastic bumpers and steel wheels.

The Transporter has been Germany’s top-selling van in Germany for decades, with the T5 finding two million customers globally since 2004 and around 12 million VW vans being sold in the past 65 years.

It looks to be another perfect campervan base. 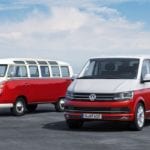 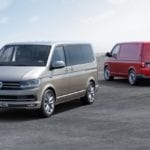 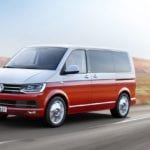 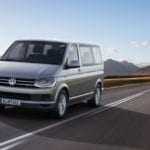 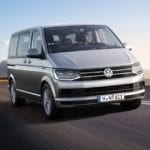 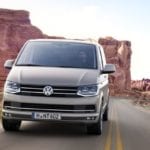 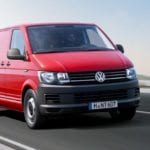 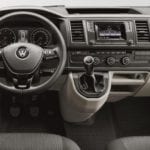 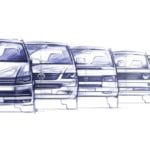 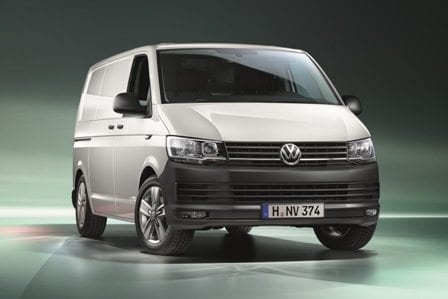 Volkswagen’s T-series has been the number one light commercial vehicle in Germany for decades. Its predecessor sold some two million units around the world during its 11 years in production. Since the launch of Transporter in 1950, around 12 million vehicles have been produced. Although the Transporter went on sale in Germany and the rest of Europe 65 years ago, right-hand drive versions were only available to special order until 1954 when they became standard production line models. Since then, more than 300,000 Transporters have been sold in the UK.

Design: the T-series is a design icon which has evolved for more than six decades. The sixth-generation Transporter has been carefully updated, offering a sharper appearance that exudes quality. The lines and edges run continuously from the front to the rear of the vehicle and the entire body now has the appearance of being milled from a solid block of metal. Like its predecessors, the new Transporter remains immediately recognisable. As with the previous generation, the new Transporter is offered in different forms. The solid foundation on which all Transporter models are based, the commercial vehicle, is subjected every day to the hardest of tests and is developed for business professionals. Next is the Caravelle range. Businesses, families and outdoor sports enthusiasts alike value its flexibility. Then there’s the Kombi and Shuttle variants. Created both for commercial and private use, these spacious multi-purpose vehicles are as highly versatile as ever. Designers and engineers have also covered a broad spectrum inside and developed high-quality interiors for the various derivatives: highly practical in the case of the Transporter van – very bespoke and refined in the case of the Caravelle, Shuttle and Kombi, satisfying the requirements of Transporter’s different customer groups. The arrangement of storage trays and compartments also depends on the model. Everything here has its place. Be it a folding ruler, coffee mug, mobile phone or tablet. Form follows function. In best of Bauhaus tradition.

Engines: a completely new generation of TDI engines are being launched for the EU6 markets. These engines have been developed specifically for the tough requirements of a commercial vehicle. Longevity and ruggedness were top priorities. The TDIs available are transversely mounted and angled forwards by eight degrees. They have a cubic capacity of 1,968 cm3 and deliver 62 kW / 84 PS, 75 kW / 102 PS, 110 kW / 150 PS and 150 kW / 204 PS.
The petrol options are four-cylinder engines with a displacement of 2.0 litres and are offered with 110 kW / 150 PS or 150 kW / 204 PS. Across the whole model series, the new engines save a litre of fuel per 100 km compared to the previous generation. All Euro-5 and Euro-6 engines have a stop/start system as standard meaning overall fuel consumption could be reduced by 15% on average. 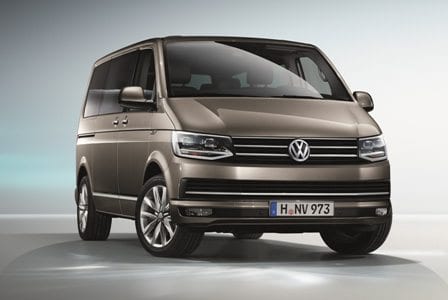 Comfort and convenience: the new adaptive chassis control, Dynamic Cruise Control (DCC), enables the new Transporter to be adapted to three driving modes: comfort, normal and sport. In each case, the electrically adjustable shock absorbers adapt to the chosen style via a preselected programme.
The variable seating layout makes the back passenger area a playground in terms of seating configuration options. Opening and closing the tailgate is now especially easy; aside from a purely manual operation, Transporter now provides the option of an automatic closing aid. It enables the tailgate to be closed with much less effort and has the latch engage in the lock mechanism, meaning significantly less obtrusive sounds. Even easier to operate is the new, completely electrically operated version. It opens automatically via the tailgate handle, and it closes by pulling a loop or by push-button. Alternatively, it can be opened by pressing a button on the driver door or on the remote control integrated within the vehicle key.

Safety: by means of radar, the ‘Front Assist’ area monitoring system recognises critical distances to the vehicle in front and helps to shorten the stopping distance. In dangerous situations the system warns the driver visually and audibly, as well as with a slight jolt of the brake. With adaptive cruise control (ACC), a sensor measures the distance to the vehicle in front and the relative speed. In combination with the DSG, the ACC system can also slow the vehicle down, for example in queues or traffic jam situations, to a complete stop. Depending on the situation, ACC then starts up again automatically after a predefined period. An integral component of ‘Front Assist’ and ‘ACC’ is the City Emergency Braking function, which provides assistance at low speeds of under 30 km/h (19 mph), significantly improving safety, especially in dense city traffic. If the driver fails to see an obstacle, the system automatically applies the brakes and ensures that the collision-speed is reduced. In order to minimise the risk related to this scenario, the Automatic Post-Collision Braking System is provided as standard in the Transporter. Another option is ‘Light Assist’ that performs automatic, camera-controlled switching on and off of the main beam. The ‘Driver Alert System’, which is standard in vehicles with a multifunction display, recognises any deviations from normal driving behaviour and recommends the driver takes a break.
Available as an option is an electronic voice enhancement system which helps the driver to communicate with rear passengers while keeping their eyes focussed on what is happening on the road in front. Without any turning of the head, the driver’s voice can be automatically amplified and played back to the passengers over the Transporter’s radio system loudspeakers.
For all vehicles with 4MOTION, Hill Descent Assist is available as an option. By targeted application of the brakes to individual wheels, which the driver is not able to do singularly using the foot brake, and by cutting the engine speed, it ensures a safe, controlled hill descent. During towing operation, electronic trailer stabilisation also utilises the components of the electronic stability control system and contributes significantly to safety while driving. A feature recommended in particular for cold, snowy regions is the new heated windscreen that ensures a clear view, not matter the weather.

Infotainment: for safety while driving, all devices are fitted with a Bluetooth hands-free system. In the case of the 6.3-inch screen, Volkswagen Commercial Vehicles is for the first time using a display that works by means of proximity sensors: as soon as the driver or front-seat passenger moves their hand close to the touchscreen, the system automatically switches from display mode to input mode. The displays also have a function that lets users use swiping motions to scroll through lists or browse CD covers of their own media library that could be stored on an SD card. Depending on the range of features, there is also the ‘Comfort’ mobile phone interface. It provides a link to the vehicle’s mobile phone antenna, an auxiliary USB port and an ergonomic storage compartment for the mobile phone. Over recent years, use of the internet on mobile devices such as smartphones and tablet PCs has grown significantly. This resulted in growing demand for instant information everywhere. Following this trend, some of the Transporter’s navigation systems are equipped with Car-Net’s Guide & Inform services.

UK details: The sixth-generation Transporter will arrive in the UK later this year. Specification and pricing will be confirmed in the near future.