Here at Base Campers®, we specialise in converting VW Campers – the T2, T4, T5, T6 – well, any Volkswagen commercial vehicle, really. But the models we see most often are the VW T5 and VW T6.

Transporters are ideal vehicles for conversion as they’re solid, reliable and they hold their value very well. In fact, the Transporter was voted the second most reliable van in the UK in the latest FN5O survey. This annual report asks 50 of the UK’s leading leasing companies to rate their vehicles based on warranty and breakdown issues. The Transporter was beaten only by the Mercedes-Benz Sprinter – not bad at all!

Following on from the cult status of its earlier models, the VW T5 has grown immensely in popularity since it’s launch in 2003. It’s now the model you come across most often cruising around the UK and beyond. In 2015 though, Volkswagen built on the success of the VW T5 and launched the VW T6, which is proving to be a favourable option for conversion too.

From the outside, the two look very similar, which often leaves people confused about what the difference is.

Given our experience and expertise with these vehicles, we often get asked this question, so here’s our take on the VW T5 vs VW T6 debate. 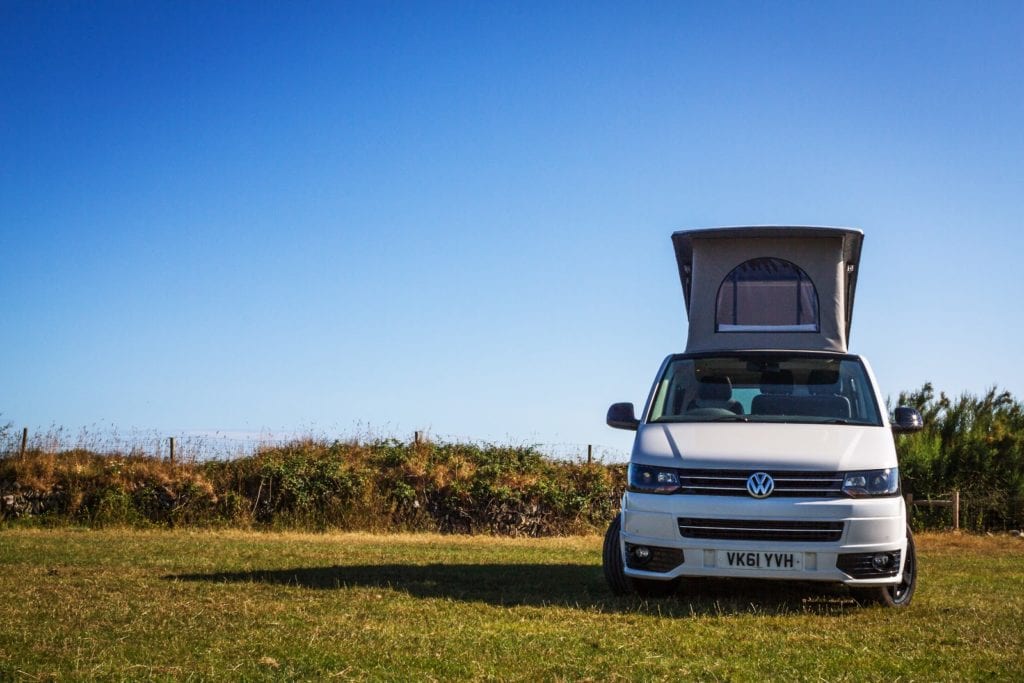 One of the biggest differences between the VW T5 and VW T6 is the engine. Since September 2015, all new vehicles must meet EU emissions standards. As it’s the newer model, the T6 has a registered Euro 6 engine, which emits fewer pollutants into the environment. The VW T6 engine uses AdBlue® urea solution to convert nitrogen oxide into nitrogen and water. It also recirculates exhaust gases to reduce nitrogen oxide and has a Diesel Particle Filter to capture soot.

These emission control systems don’t come at the expense of engine power though. The VW T6 is still available with a 2.0-litre TDI turbo diesel engine.

To make space for the AdBlue® tank, Volkswagen reduced the fuel tank capacity on the T6. With this in mind, you’d think you’d have to fill up more often. But the T6 also has VW’s Bluemotion Technology, which overall decreases fuel consumption.

For example, the auto start/stop feature switches the car off when it’s not in motion, while low rolling resistance tyres mean less friction on the road, so less energy and less fuel. T6s can also come with regenerative brakes, which store energy normally lost during braking and reuse it to accelerate or to start, meaning you need less fuel to get going.

It’s worth mentioning though that, because of the auto start/stop and regenerative brakes, T6s usually need an added battery-to-battery charger.

With the T6, VW made significant measures to reduce noise when compared to the T5. Even at low speeds, there’s little wind, road and engine noise – perfect for long, cruisy journeys. They also improved the gear transition on the T6 vs. T5, meaning you get a smoother, more comfortable driving experience.

As well as the Anti-Roll Protection (ARP), Rain Brake Support, Ready Alert Brake and Hill Start Assist that you get with the T5, the T6 has some important added safety features.

First of all, the T6 benefits from Front Assist which uses a radar system to monitor the distance and relative speed of the traffic ahead, warning you when you get too close. And at speeds of up to 19mph, it works with the City Emergency Brake function to automatically apply the brakes if it senses a collision.

The T6 model also has Post-Collision Braking, which automatically reduces the speed of the vehicle to 6mph following a collision to help prevent another crash. 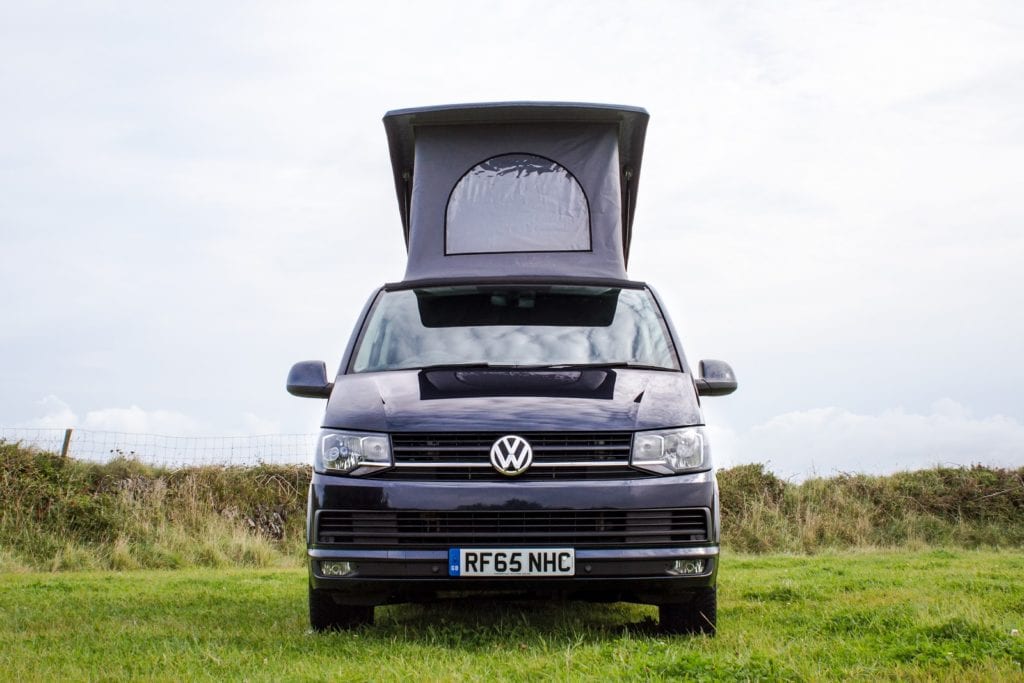 On the T6 (specifically on the Highline model), you get some 21st-century perks. A 5-inch touchscreen, Bluetooth, USB port and heated windscreen are all great additions for long drives and modern van life.

But the T5 boasts some modern perks too, such as parking sensors, colour-coded bumpers, alloy wheels, digital radio and multifunction steering wheel – all of which you get on the T6 too.

Despite minor variations between the two models, the T6 is more of a facelift than an update on the T5. Technically, the two are very similar.

Both models have the same body and therefore, the internal and external dimensions are more or less the same. The two vehicles also have similar engine outputs, load options and payloads, so from a technical perspective, you can’t go wrong with the T5 or T6. 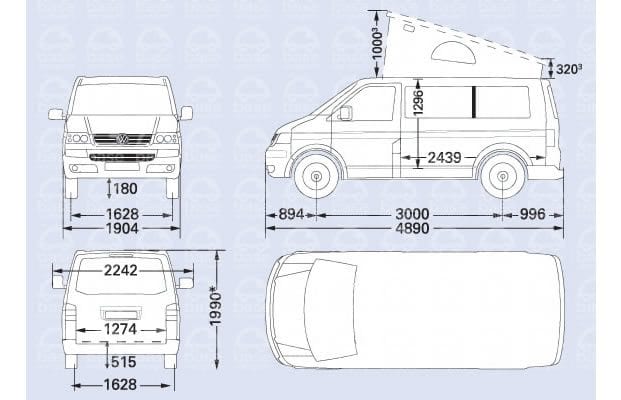 *Both the T5 and T6 offer a range of load lengths and heights. This image shows one variation.

So which model makes a better camper – the VW T5 or T6? Well, despite minor changes and improvements, the two are actually very similar and therefore, it’s difficult to say. The T6 does have a more eco-friendly engine and added safety features, but it is the more expensive model. Technically and dimensionally, they’re almost identical. So from a conversion point of view, both make great campers with heaps of capacity and potential to realise your van life dreams.

From campervan interiors to pop-top roofs and rock n roll beds, we’ve heaps of experience converting these versatile vehicles to cosy campers. If you’d like to know more about the T5 or T6, or about our camper conversion services, give us a call today.

Juts to note that not all T6 vans have Euro 6 engines. The early models – from September to December 2015 – mostly had the old Euro 5 engines from the T5, with Euro 6 as an option. There are also plenty of 2016 registered vans with the older engines, presumably old VW stock that was still be sold. So, if you’re after a Euro 6/ clean air zone compliant van, make sure you check. If you want to do a quick check, put the registration number into HPI’s checker or visit the Transport for London website.

[…] wrote this top-ranking post for the lovely team at Base Campers following our top blogging tips as outlined above, and it had […]

wpDiscuz
2
0
Would love your thoughts, please comment.x
()
x
| Reply
We use cookies to ensure that we give you the best experience on our website. If you continue to use this site we will assume that you are happy with it.OkPrivacy policy